Bijleveld: Defence preparing to help in the fight against corona

The Netherlands Ministry of Defence is preparing to help the population of the Netherlands in the fight against the corona virus. According to Minister of Defence Ank Bijleveld-Schouten, the armed forces are taking into account a range of scenarios. She commented that the deployment of the military has fortunately not yet been necessary, but that if required the armed forces would provide support where needed.

Archive photo from 2017: Surgical team during an exercise in the operating room on board HNLMS Rotterdam.

She gave medical capabilities as an example, commenting that the armed forces have a major incident hospital in Utrecht, as well as another emergency hospital that it may be possible to deploy, adding that they also have the capacity to keep people in quarantine. And all this only concerns what is available on land; the armed forces also have capabilities available at sea.

She was referring to the Royal Netherlands Navy, of course. Bijleveld explained that the amphibious transport ships HNLMS Johan de Witt and HNLMS Rotterdam have spacious state-of-the-art sickbays where patients with contagious illness can be treated. She went on to say that the same applies to the logistic support and supply ship HNLMS Karel Doorman. It has its own laboratories and a special quarantine area with a ventilation system, which is ideal for treating patients with contagious diseases. Which of these capabilities are available is currently being investigated. 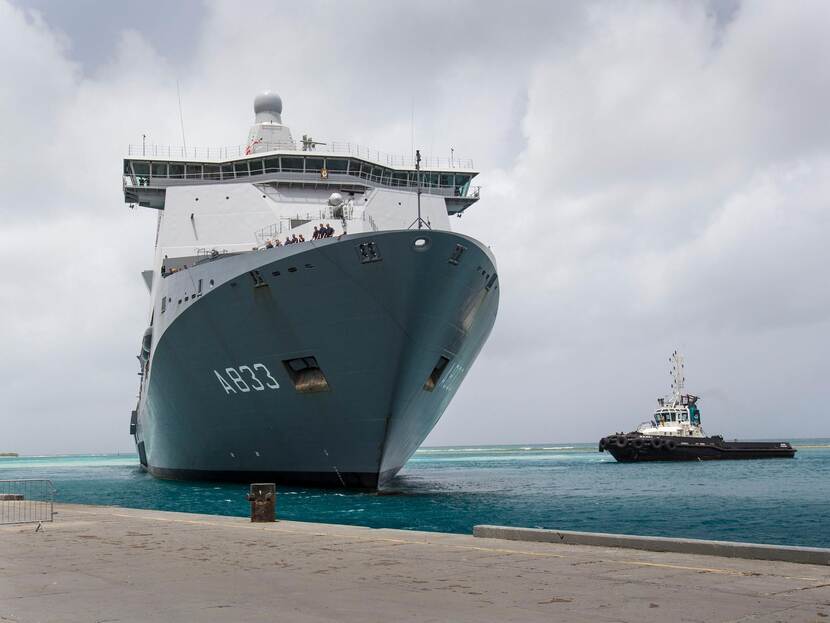 HNLMS Karel Doorman proved its great added value in 2014 when the ship was deployed in the fight against Ebola in West Africa. All 3 ships have operating theatres and in total they have around 30 intensive care beds.

Bijleveld commented that up until now deployment has not been necessary, but that the armed forces are always ready for when they are needed. She said that it would be hopeless if the armed forces were to wait to start preparations until they were needed.

The preparedness of Defence extends further than just beds and medical help, she continued. Military personnel can of course also be deployed for transport or distribution, or whatever else is needed. The army can build emergency facilities. Should it be necessary, Defence could also support the police with maintaining public order. She commented that supporting civil authorities was one of the tasks of Defence. And while Defence may not always have a strong visible presence at the moment, the Netherlands can always rely on the armed forces. She added that one must of course take long-term deployment into consideration.

Of course, Bijleveld is also keeping an eye out for military personnel, because they are just as susceptible to the virus as anyone else. Defence is therefore following the advice of the RIVM in order to stay on its feet as long as possible. She explained that the situation in deployment areas is being monitored and measures are being taken. In the Netherlands, personnel are working from home where possible. She went on to concur with the prime minister, expressing her great respect for the members of the emergency services, doctors and nurses, and everyone who is now on the frontline of this crisis. She commented that we can only fight the virus together and in a controlled way, and added a word of advice to follow the instructions and help one another if necessary.